1. What is TVB Anywhere SG?

TVB Anywhere is TVB’s legitimate over-the-top (OTT) service exclusively for Singapore audience offering an enormous archive of classic and latest TVB programs. For more info on the App, you may refer to this website (https://www.tvbanywhere.com.sg/)

As long as your Operating system is iOS 9.1 or above or Android 5.0 or above, you are able to use TVB Anywhere SG application.

4. Can I stream TVB Anywhere Premium using my computer/laptop or miracast/ Air Play onto my Smart TV?

Unfortunately, the application is only available via the TVB Anywhere app on mobile devices (phone/ tablet) at this moment. You can cast your mobile device onto your compatible TV if required.

5. Will there be data consumption when I use TVB Anywhere Premium when I am out on the go?

Yes, normal data consumption will be applicable as per your mobile plan.

6. Where can I sign up TVB Anywhere Premium with MyRepublic?

7. I have subscribed to "TVB Anywhere", but have not received my login credential, can you help me?

You will receive your login credential via email from TVB in 1 to 2 working days after your service is activated.

If your service is already activated or you are our existing customer, you may check your junk/spam mailbox as the email with your credential may have landed there.

Alternatively, you may also try to reset your password on the “TVB Anywhere SG” application, a new password will be sent to your registered email address.

8. What is the difference of signing up to TVB Anywhere Premium via MyRepublic or via Google Play/ App Store?

There will be no difference in content offering for the TVB Anywhere Premium. However, MyRepublic customers will be able to enjoy direct billing on your MyRepublic bill, as well as a special rate of $4.98/mth for mobile/ broadband subscribers. For a limited time period till 31 December 2018, MyRepublic customers can also enjoy 3 months of subscription free.

9. What are the available packages?

MyRepublic mobile and broadband subscribers may add on the TVB Anywhere Premium as a Value-added service, and enjoy 3 months free subscription, $4.98/mth applies thereafter. Promotion is valid till 31 December 2018.

10. How can I terminate my "TVB Anywhere SG" subscription?

You may terminate your subscription via MyAccount. The request will take up to 2 working days and you may check the Account Expiry date via the TVB Anywhere App, under “Account”.

11. I am a current user of TVB Anywhere (Free version). Can I subscribe to TVB Anywhere Premium (via MyRepublic)?

Yes, you may subscribe to TVB Anywhere Premium (via MyRepublic) via MyAccount or sign up online. We will require up to 2 working days to activate the TVB Anywhere Premium (after your mobile/ broadband order is completed), and you will receive an activation email from TVB once the request is successful. Your login and password will be the same since you already have a TVB Anywhere account.

13. I am connected to Wi-Fi/mobile data, but I am still having issue with the TVB Anywhere Application, can you help me?

Do try to uninstall/ install your TVB Anywhere application to try. If you are still not able to use TVB Anywhere Application, do drop an email to cs@tvbanywhere.com.sg and TVB will get back to you in 3 working days.

14. Can I stream TVB shows with my TVB premium credential using multiple devices?

Yes you can! You may use the same credential on different devices (mobile phone and tablet only). You can watch up to a maximum of 3 simultaneous viewing.

To check out the plans, go to http://order.fibrebb.sg/mobile

For existing broadband customers, the company is also dangling incentives for them to sign up, if they haven’t done so. They stand to get 3GB more data for the Smart plan, and 8B more for the Mega and Xtra plans.

The mobile plans all come with features like “boundless data”, which will not penalise consumers for busting their data caps with extra charges but will see surfing speeds lowered instead. This was a feature announced when they launched two mobile plans for its existing customer base back in May.

MyRepublic’s chief marketing officer Shivendra Singh said during the briefing that this, among other features, are to “ensure we are trustworthy” to the consumer. Unlimited data plans, he elaborated, are “not honest” as they usually come with hidden provisos, but its boundless data plans means “customers don’t need to worry about excess data charges”.

Mr Rodrigues also told Channel NewsAsia on the sidelines that based on customer response following the launch of Uno and Ultimate for “friends of MyRepublic”, feedback has been “good”, particularly for those who have busted their data caps and had their surfing speeds managed.

“It’s like when we drop from 4G to HSPA today. You probably can’t watch a high-definition video, but you can still do stuff like send WhatsApp messages,” he said.

These plans will also have 1,000 minutes of talk time and 1,000 SMS text messages, free local delivery of SIM cards and activation, the company said, adding new customers can sign up from Thursday.

Key to the user experience is the MyRepublic mobile app, available for both iOS and Android devices, said Mr Singh. Users will be able to customise their mobile plan, such as signing up for data boosters or roaming packages on the fly, and track their usage from the app.

The intention behind its design is for users to do what they need within three clicks in the app, he added.

These on-the-go provisioning of services are enabled through the company’s “thick MVNO model”, which it said is first of its kind in Singapore.

CEO Rodrigues said it is a “multimillion-dollar network system” that allows it greater control over the delivery of services to customers compared to traditional MVNO arrangements which sees these operators just resell products from the main telco.

This appeared to be similar to rival MVNO Circles.Life’s platform Circles-X. When asked what’s the difference, Mr Singh declined to comment on its competitor’s products.

CONSUMERS TO BENEFIT FROM LOOMING COMPETITION

Analysts Channel NewsAsia spoke to ahead of the launch on Thursday predicted a period of fierce competition in the local telecoms market, with consumers the main beneficiaries.

“At roughly 8.5 million subscriptions, the Singapore market is already over-penetrated,” Mr Putcha said. “We expect a period of fierce competitive intensity and there will be some clear winners and losers, with the incumbents, especially the smaller ones, likely to cede ground and market share.”

With the pending entrance of fourth telco TPG Telecom, as well as the introduction of new MVNOs in the past year, consumers will “benefit immensely” from lowered prices, higher data bundles and flexible plans, the analyst said.

He pointed to similar developments in Japan last year which suggest that full-fledged telcos, while benefiting from leasing spectrum to MVNOs, will also reduce prices to maintain their subscriber base.

These telcos also have more tools than just reducing costs, as they can turn to digital content for growth, the Canalys analyst said

For instance, while they may not match MVNOs in attractive price packages, bundling data with content such as free streaming of Spotify or Netflix for example, is a “great way” for them to remain subscribers and improve revenue.

Wi-Fi routers work best when placed out in the open. That’s why we designed the MyRepublic Wi-Fi Hub and Wi-Fi Halo to not only provide fast speeds for all your devices, but to fit in your living room.

Better Speeds with MU-MIMO and Beamforming

Get better performance with the Wi-Fi Halo with MU-MIMO technology allowing each device their own dedicated high-speed connection. Beamforming further focuses the Wi-Fi signal on each device, improving Wi-Fi speeds.

Both the MyRepublic Wi-Fi Hub and Wi-Fi Halo transmit on 2.4GHz and 5GHz bands at the same time, allowing your devices to connect on the band allowing the fastest possible performance.

*Based on theoretical peak speeds. Actual speeds will likely be lower. 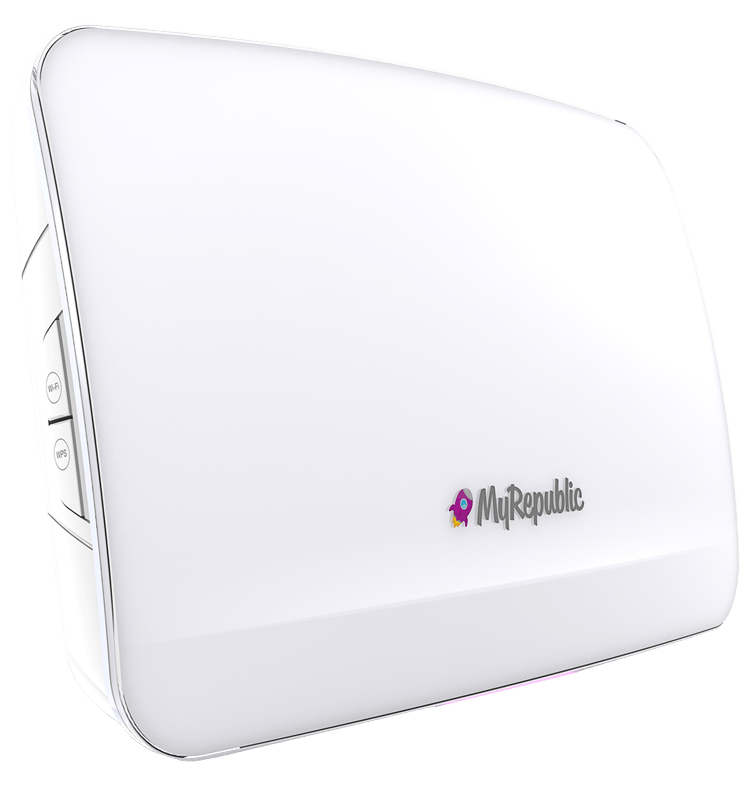 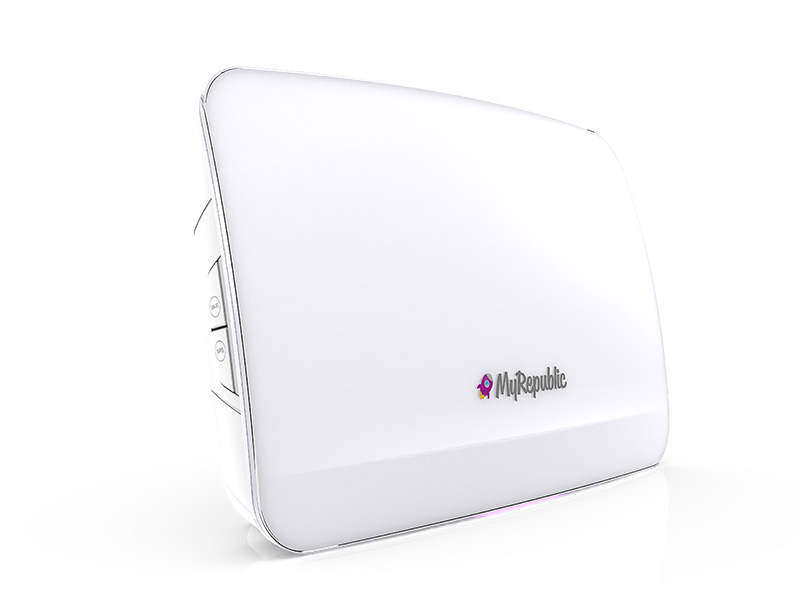 Your home router has one job: So why does it make it so hard to do that job? From dropped connections, to complicated setups, to indecipherable troubleshooting menus, to looking like a gaudy blot in the middle of your living room.

But the MyRepublic Wi-Fi Halo is different. Thank goodness it’s different. The first thing you’ll realize is that it doesn’t look like a mechanical bug that might rise to life and gobble your cats. Instead, the Wi-Fi Halo has a streamlined exterior with gently soft ambient lighting on its underside. 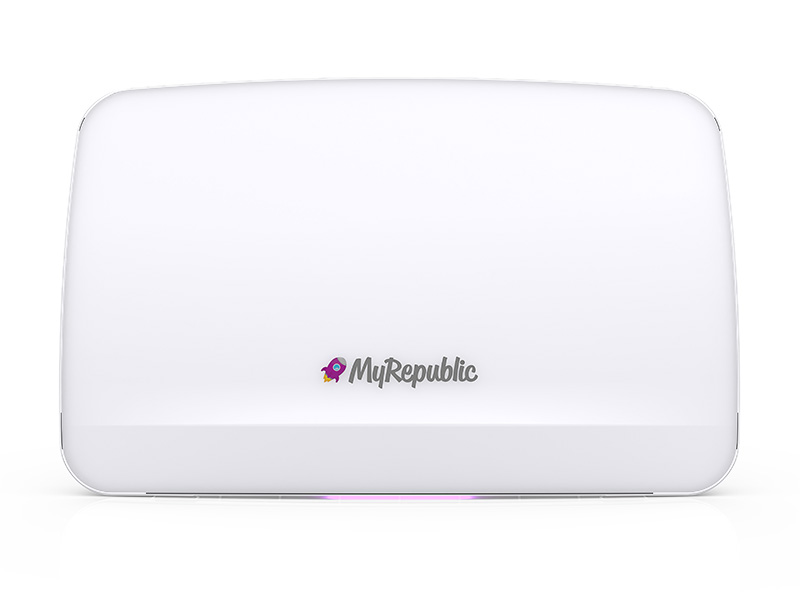 But don’t underestimate its minimalist design. The Wi-Fi Halo is a state of the art AC2200 dual-band router with a four-stream, four-antenna engine that features modern Multi-User (MU-MIMO) Beamforming technology for fast and reliable internet connections for multiple devices.

The Wi-Fi Halo also solves the most vexing parts about routers for most people: setting up and troubleshooting. A Setup Wizard helps you get connected in minutes and helps you to change your default passwords easily, the first line of defense against internet attacks.

Instead of a confusing interface that looks like a leftover from the 90s, the Wi-Fi Halo comes with a modern UI that anyone can use.

A built-in firewall also secures your home network, and parental controls, as well as a Wi-Fi analyzer, gives you fine-tuned power over internet use. The router even comes with guest networks set up and easily toggled on, so you don’t have to worry about sharing your personal network’s password with visitors.

With your permission, customer service agents can remotely fix common issues like checking the network connection status, checking which devices are connected, resetting the network password and updating the firmware.

It’s like having your own IT department ready to help you with Wi-Fi woes. And if you prefer not to have remote access to your Wi-Fi Halo, you can easily disable the function under its settings.

The Wi-Fi Halo normally commands a price tag of S$349, but new and existing MyRepublic customers can get a great deal on the router. Depending on their choice of MyRepublic fiber broadband plan, customers will receive a discount on their purchase of a new Wi-Fi router, ranging from $70 to $350 – the latter essentially making the Wi-Fi Halo available for free. Get your free Halo with one of these great plans here.

To find out more about the MyRepublic Wi-Fi Halo, click here.